The IC-7702 counter module is used for the connection of incremental position scanners (rotational or linear), the realization of 32 bit forward or reversible counters and other functions. The module has 4 counters. The counters (numbered 1 to 4) are divided into two pairs, which are both identical. Each pair of the counters uses 5 inputs and 2 outputs. All counters can be used in the IRC mode, the second counter from the pair (counters 2 and 4) can be additionally used for signal period measurement s. The width of the counters is 32 bits.

All counters have inputs for counting (in the reversible counter mode V - up, G - down, in the IRC mode are V and G phase-shifted signals of the stop counter) and the zero pulse (NI - in the counter mode it is used for counter clearing, in the IRC mode it is used to memorize the counted value), the counters 1 and 3 additionally have a measuring contact (MD), counter clearing (CLR) and two outputs. The outputs can be used as universal ones controlled by the program, as an output of a digital cam or for positioning. The mode of positioning can be bi-directional with one speed (the outputs control the direction of movement) or unidirectional with two speeds (the outputs control the slow and fast movement).

Counters 2 and 4 can use only two input pins that they share with the first counter from the pair. Based on their setting, their meaning is V, G (in the reversible counter mode V - up, G - down, in the IRC mode are V and G phase-shifted signals of the stop counter) or V, NI (forward counter mode, V - up, NI - counter clearing). At the G input, these counters can measure the signal period.

Each input has an independent digital filter, which suppresses unwilling interference and contact bounces. The filter can be set-up to one of the four time periods (delays):

COMx Common pole of group x of input circuits of the module.

UDO Common pole of output circuits of the module (+ 24 VDC),

COM Common pole of output circuits of the module, operational

only (necessary for function of input circuits of the outputs 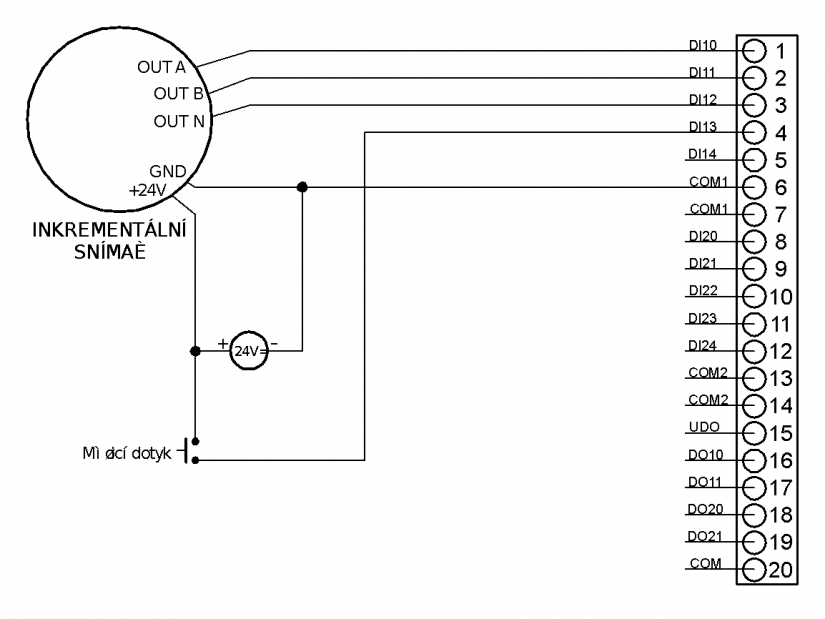 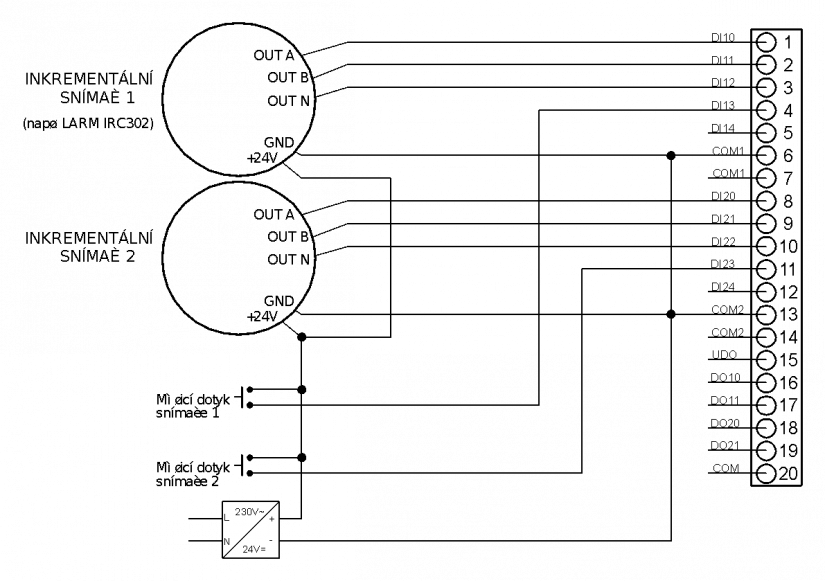 The figure 8.5.3 illustrates the basis use in the configuration for the evaluation of two incremental position scanners. The connection assumes a scanner fed from a 24 V= source using an external 24 V power supply source. The scanner outputs are open PNP collectors (switches against positive terminal of +24 V power supply). The contact of the measuring contact is supplied from the 24 VDC source (as the standard PLC binary input). 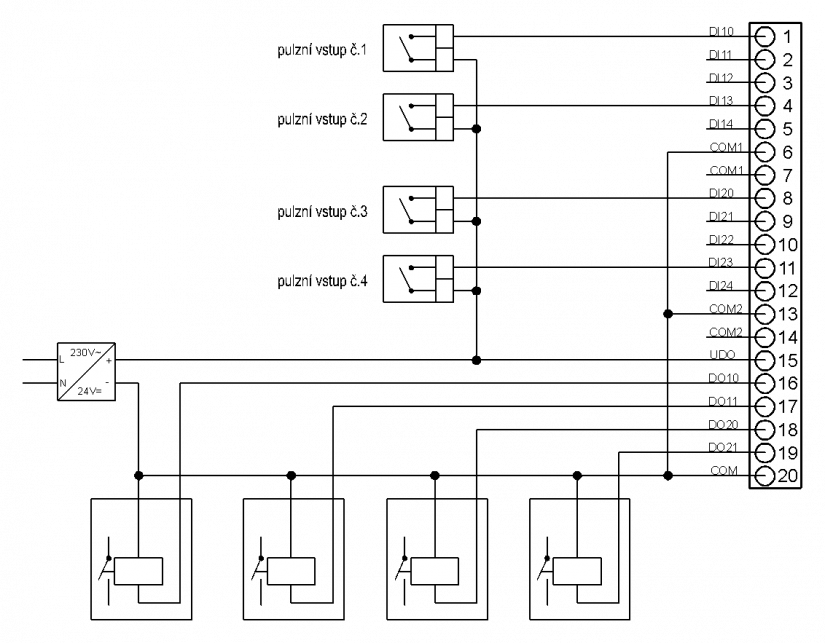 The figure 8.5.4 illustrates the basis use in the module configuration as 4 forward counters. The connection assumes pulse outputs from the technology 24 V= and PNP open collector and equivalent solution (switches against the positive terminal of +24 V power supply). Possible bounces of the switches can be treated by a a digital adjustable filter on the module. All outputs can be used as standard PLC outputs.

The outputs can be used in various modes that can be set in the control word by the program:

Detailed information on module modes can be found in the documentation TXV 004 22.