Tecomat Foxtrot systems are also used in the management and modernization of public lighting systems. With them, it is always a comprehensive solution and centralized management. Turning on and off or setting the light intensity of a particular lamp is one thing. The second thing is to minimize the consumption of ballasts when they are not lit. For this, Teco a.s. two novelties in the portfolio of modules connectable to foxtrot. Bus and wireless module, each of which has a relay resistant to the inrush current of up to 800 A and a low-voltage output for controlling dimmable ballasts. The bus has two such output channels, the wireless one. And why is it advisable to disconnect the ballasts when they are not lit? Classic public lighting is without tension during the day. However, modern lamps and street lighting poles are potential carriers of many other functions that must work during the day. Q-EL PRO develops such lamps and Teco a.s. became its technological partner in the field of management. This company came up with the idea of ​​integrating cameras directly into the luminaire next to the light source. The camera is inconspicuous at first glance, while providing a 360 ° view of the entire area at once. Another technology that can be printed in the VO lamp in the future is the AC electric car charger. In cooperation with another company, Kooperativa, which is a traditional manufacturer of VO steel columns, we have prepared a model lamp with an intelligent charger terminated by a standard  Typ 2 (Mennekes). The intelligence of the Foxtrot steering charger lies in the ability to regulate the charging current of the electric car so that the total maximum current allocated to the public lighting branch is not exceeded. Charging current control where there is a load or limited current source on the power supply in addition to the electric car is one of the domains of the Foxtrot system and one of the main differences from uncontrolled self-built charging stations with guaranteed maximum current for electric car only.

However, smart public lighting is not only the luminaires themselves, but also their centralized management. For her, the Dubai-based development group TecoME, which has advanced experience with the integration of camera systems, has developed a dispatching portal for urban public lighting. Based on the SCADA system, Reliance compiled a reference project with Q-EL PRO in the town of Nová Role. The attached pictures will say more about him. Mj. Due to the fact that a team from the Middle East also took part in the work, it is clear that Teco's solution is again aimed not only at home but also at the global market. This is also underlined by the participation of Q-EL PRO at the Teco stand at the international Light & Building 2018 trade fair in Frankfurt am Main.

The R-SL-0201L-A is single-channel connected to the Foxtrot control panel wirelessly at a frequency of 868MHz. It has two inputs for an external sensor and an internal primary current detector to diagnose the function of the LED chips on the secondary side.

Fig. Teco, in cooperation with a consortium of other companies, has prepared a model lamp that can modularly include switched and dimmable lighting, lighting with controlled chromaticity temperature, 360 ° camera, electric car charger, air sensors - especially airborne dust. Subsequently, the communication touch screen, alarm button, RFID reader or even wifi hotspot. 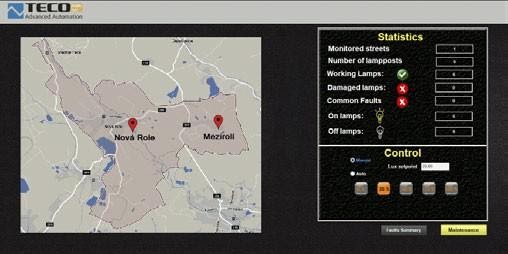 Fig. Overview screens for controlling public lighting lamps in the reference locality of the town of Nové Role. The last screen is an example of the detailed settings of a specific lamp. At the same time, there is a streaming online view of the camera installed in the luminaire.