What is API? According to Wikipedia: “API - short for Application Programming Interface in computer science means an interface for application programming. This term is used by software engineering. It is a collection of procedures, functions, classes, or protocols from a library (or perhaps another program or operating system kernel) that a programmer can use. ” that can run on PCs, servers or mobile devices. And because Tecomats, although originating in industrial automation and swear by IEC 61131 series standards, are fully integrated into the Internet and monitor compatibility with IT technologies, they took another significant step toward IoT support since the implementation of the MQTT protocol in 2017. . The web server of PLC systems Tecomat Foxtrot and TC700 is equipped with API interface TecoApi from firmware version v10.4, which provides services enabling reading and writing data from / to PLC system using HTTP protocol. The data is provided in JSON (JavaScript Object Notation) format. JSON is a textual, language-independent format used for data exchange. Further details on the JSON format can be found at http://www.json.org/json-cz.html.Mosaic v2018.1 or higher is required to program Tecomat with this feature.

The TecoApi interface is also described with examples in the TXV 005 37.02 documentation, from which we briefly select the principle of operation:

Communication via TecoApi takes place via the HTTP protocol in the form of a question / answer. The TecoApi interface provides services that allow reading and writing objects from / to the PLC system. An object that is accessible via TecoApi can be any variable in the PLC program. All variables that are to be visible as objects via the TecoApi interface must be marked with the {PUBLIC_API} directive. There must be at least one web page created by WebMaker in the PLC project and at least one access name + password for the TecoApi service must be set in WebMaker. Although in the world of PLC and industrial automation there are also faster transfers, in the world of IT resp. IoT is an API interface extended and standardized for communication with single-purpose devices such as weather stations, smart thermostats, smart bulbs, various alarms, doorbells, etc., where the volume of transmitted data is relatively small and their delay in transmission and processing is not so critical. Tecomat can also be in a similar role "Things on the Internet" today, which mediates on its API interface any input and output signals from the controlled object or, according to the received data, performs a control activity / action that the user can program himself.

With this step, Tecomats have become one of the first programmable logic controllers in the world with a natively built-in API interface, further pushing the boundaries of their traditional communication universality. They are becoming a major player - a node - in networking solutions for Smart City and Smart House and, of course, for any application in the Internet of Things and industrial automation following Industry 4.0 trends. and wherever it is necessary to connect more diverse devices and sensors, communicate them with databases in the cloud, while ensuring their functional independence and autonomy in the event of a lack of connectivity to the Internet. 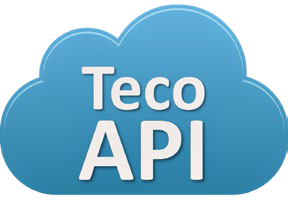