More and more companies using a fleet of cars for short distances of up to 100 km today are considering the transition to electromobility, which offers fuel savings, lower costs and simple maintenance, easy operation and an overview of the status of charged cars. The operation of such a fleet requires a robust and reliable network of mutually communicating and control-coordinated charging stations. With their large number on one inlet, simple and isolated charging points are no longer enough. It is necessary to deploy technology that will allow you to safely charge more cars at the same time, a technology that itself actively limits and controls the charging priorities of each car separately. Technology that controls the amount of energy simultaneously consumed for charging cars according to the current consumption of the entire building or complex and according to the maximum supply capacity or other specified criteria. The requirement is formulated simply, but the technical solution is no longer so simple. However, the complete flexible system can be advantageously built on a uniform basis of the Foxtrot system. Thanks to its modularity, flexibility of interconnection topologies and variability of application programs, it is possible to achieve all requirements with a single system. It is possible to start with a small set and then gradually expand, interconnect, modify and manage it on several levels. E.g. according to Fig. 1, there are charging stations in various areas, for example in another city, where Foxtrot itself will take care of the first stage of charge regulation. Typically, by limiting the amount of charging current of individual cars, it eliminates exceeding the maximum circuit breaker current or exceeding the agreed maximum for large customers connected directly to the 22 kV distribution network. It provides electric cars with the maximum available electricity, dynamically in relation to the current consumption of the building or the entire complex. It could be said that it smoothes the consumption peaks by controlled storage delay of the consumption intended for charging.

With the Foxtrot system and RFID reader modules in each wallbox, an even higher degree of charge priority control can be achieved between a large number of charging points. After connecting the charging cable to the car socket, users can further identify themselves with an RFID chip directly on the charging stand and thus influence the preferred charging of their car. Identification data is immediately sent to the parent system for verification. Charging will then only start after authorization has been verified or a priority charge will be charged to the person's personal account.

The first implementation of a robust charging infrastructure built on the Tecomat Foxtrot system was supplied by PREměření during 2018 for the newly reconstructed headquarters of Moneta Money Bank in Prague. This bank not only declares its focus on green technologies, but actually implements it through a massive transition to electric cars, perhaps the most massive in all of Europe. Teco, together with Axomer, has become a subcontractor of the solution, so the only basic Foxtrot module serves all 36 underground parking spaces. Each is equipped with a charger with a cable and an RFID reader. Foxtrot reads online the instantaneous consumption of the entire building directly on the central supply behind the distribution transformer, so it knows at any time how much energy is left to charge up to the limit. It then distributes this energy according to the current needs of electric cars and the individual priorities of their users.

The implemented installation has a control structure with two levels. The basic one is implemented by Tecomat Foxtrot, ie a standard PLC, which guarantees the maximum charging speed at any time and independently of the superior level, if the limit limits are not exceeded.

Each wallbox has its own instance in the application program, its own control loop, which is executed in parallel with all the others. Each such wallbox also has its own website on an integrated website inside the central Foxtrot PLC. It has its own small interactive configuration and overview menu available after authorization from any device with a browser, for example from the mobile phone of a service worker or garage manager. All information about the charging process is displayed together. For supervision, it is very easy to plan a service intervention remotely for an individual wallbox or comprehensively for the entire building. All data and changes are sent by Tecomat Foxtrot to the server. The web application then works on this data as the second control level forming the basic user interface for the entire charging infrastructure. The entire charging infrastructure can be gradually expanded and interconnected with other local infrastructure built on the Foxtrot system in another building or city. This creates a network of charging stations that are automatically regulated to avoid penalties from the distributor or equipment outages, and the customer gets an automatic energy cost saver, a comprehensive overview of all charging stations and management of charging access verification. 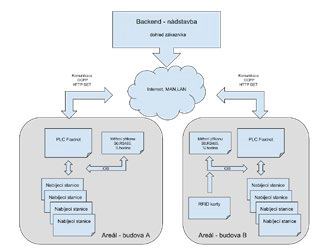 Fig. 1 Block diagram of the charging infrastructure in two areas, each under one inlet and one

billing electricity meter with restriction either to the maximum current or to the maximum reserved power expressed by the so-called quarter-hour maximum. Supervision is via an Internet application. 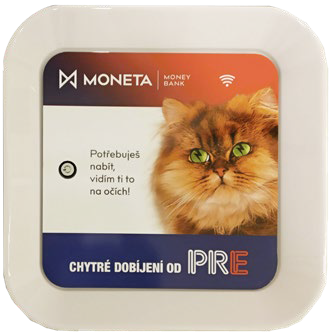 Fig. 2 Each wallbox contains not only safety elements and an electricity meter, but also an electric vehicle communication module and an RFID reader both connected to the central Foxtrot. 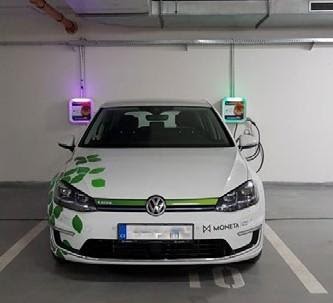 Fig 3. Each parking space in the Moneta underground car park is equipped with a charger. The status of the charger is indicated by the color of the LED indicator. All chargers are connected by a two-wire CIB installation bus and are controlled online by Foxtrot in a cycle time of up to 150 ms.

The 62 current charging stations are to be expanded to more than 100 in the next stages. 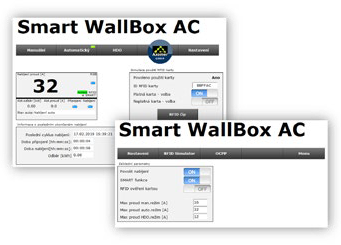 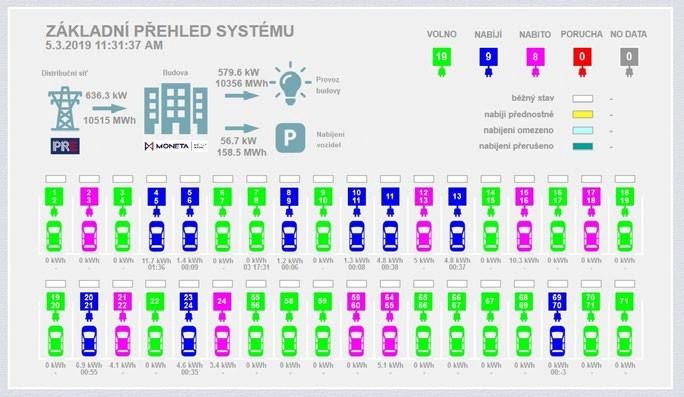 Fig 5. The superior level of the charging infrastructure with Foxtrot is a web application with a user interface giving an overall overview of the current state of charging,

provides historical data and statistics on the use of individual stands and the management of individual users. It allows to operatively change the limits as the amount of the agreed reserved power of the building develops, for example.

Fig. 6. Foxtrot is in control of the parallel charging of the entire fleet of e-Golf cars.